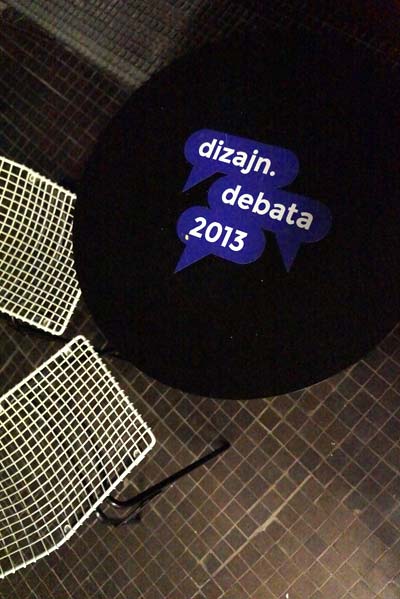 One of my favourite trips from 2013 was the one I did to Warsaw end of the year. In November Rene Wawrzkiewicz, Agata Szydłowska , Paulina Paga and Julia Missala invited me to speak at the “Design (r)evolution” conference at the Museum of Modern Art. Probably one of the best organised events I have attended for a long time. The team around Pracownia Krytiky Dizajnu took care of everything. But mostly not just to make a great bunch of foreigners feel welcome, but also to give me my always desired feeling that Poland is home to me. That means a lot for someone who left the country a long time ago. Trust me, it wasn’t my choice aged 4! However, the two days of the conference were filled with a tight program around critical lectures by a fair amount of international people. The evenings were designed to come together for good food and interesting conversations. It was even getting better: on the 3rd day Rene Wawrzkiewicz and Agata Nowotny took us around, introduce us to the cultural heritage their city hast to offer, showed us exciting places and connected us with a great amount of people. All in all everything you wish for in a trip to Poland’s capital. It is putting itself in the position to become one of the most interesting places in Europe, I think… Here comes a visual documentation of what I just told you. 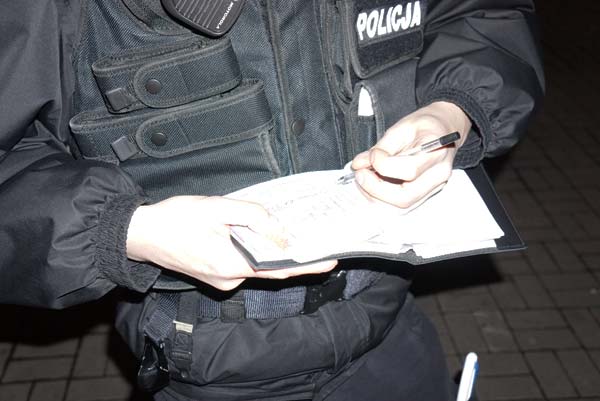 Shortly after I arrived with the Wawa Express in Warsaw I had an encounter with the local police. I trespassed the rail tracks around the Palace of Culture. An act that is strictly forbidden as I found out. I got myself the first fine in my home country. Daddy would be proud…

You would think it’s an original, but it’s a neon by contemporary artist Polish Paulina Ołowska that was made in 2009 and is now part of the facade of the Museum of Modern Art. 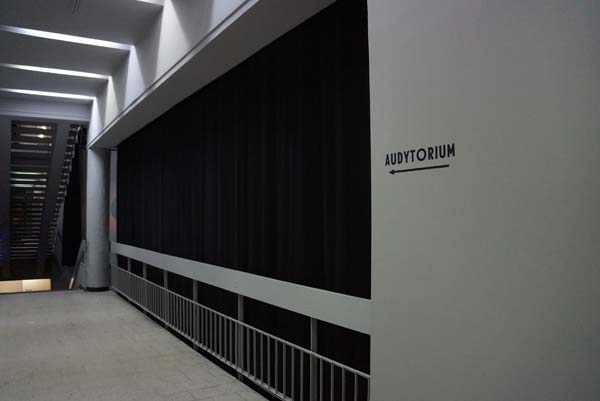 That’s the entry of the auditorium at the Museum of Modern Art. The corporate identity is done by Basel-based graphic designer Ludovic Balland. Poland got many very talented graphic designers, typographers and illustrators. I was surprised, almost disappointed, to see that they didn’t hire a Pole. 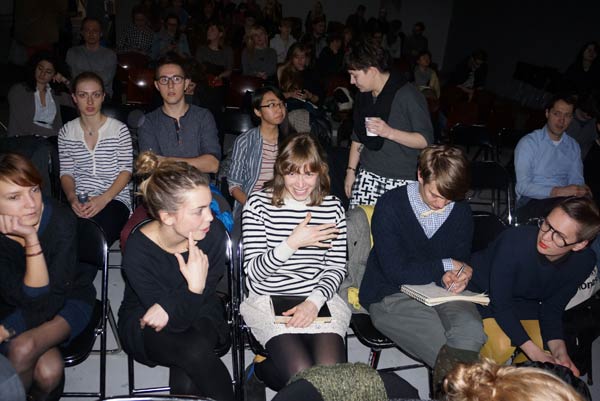 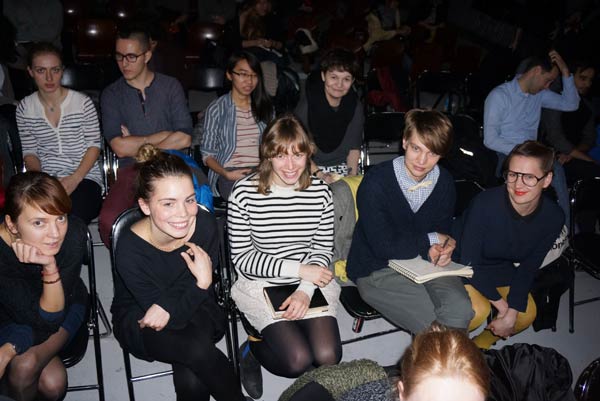 .. in the background Monika Zając joined the picture 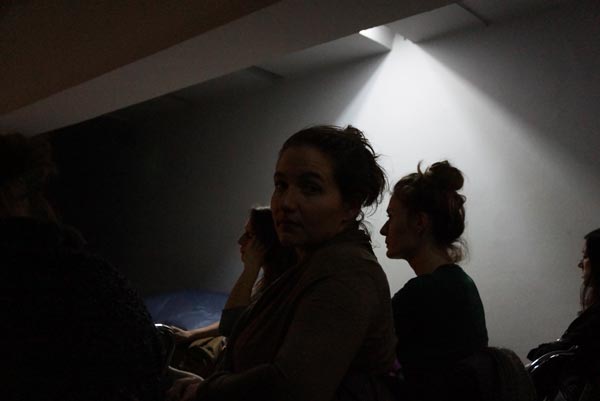 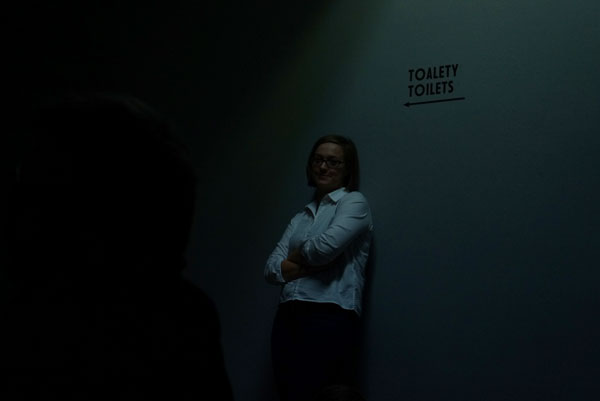 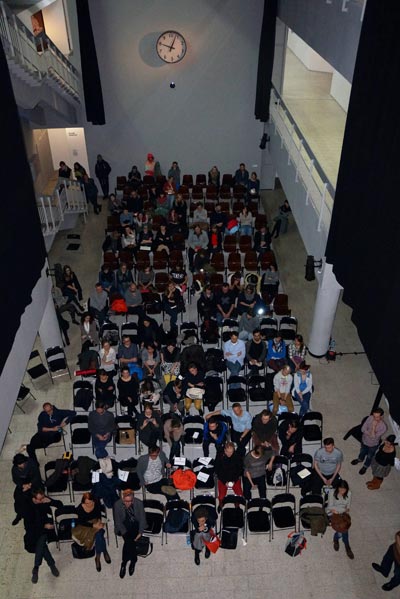 A picture of the crowd from the 3rd floor. 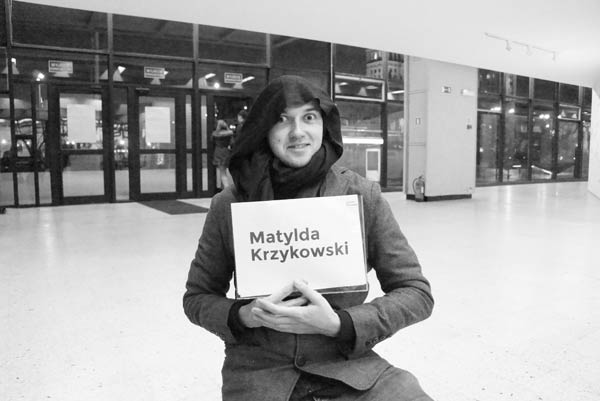 I want Kris Lukomski to have his own show. Together with Natalia Mleczak! It would be hilarious! 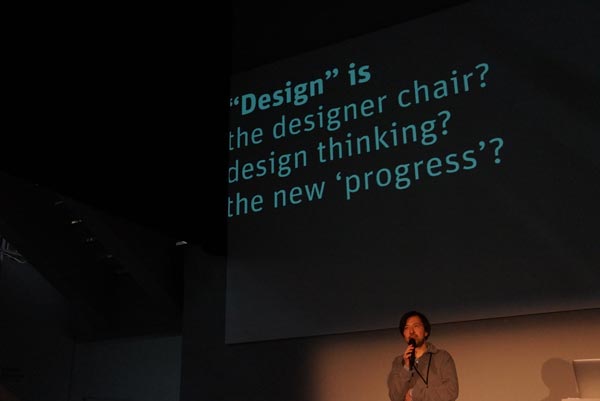 A long list of Typographers, graphic designers, curators, writers, thinkers and designers was invited to ‘Design (R)evolution’. Berlin-based consulting designer Severin Wucher was among them. One of his proposal was to publish a dictionary with defnitions and associations of the word ‘design.’ You should drop him an e-mail with your idea! 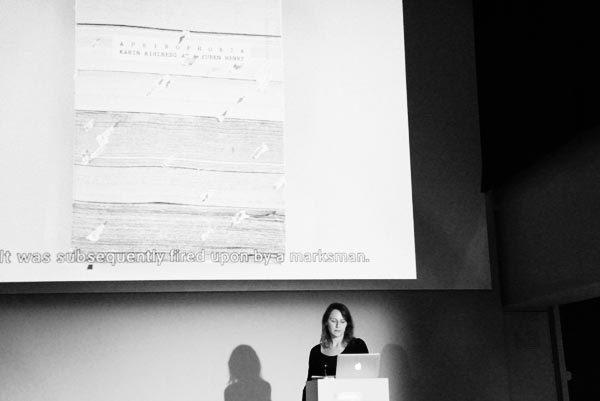 Charlotte Cheetham from the blog Manystuff remained very silent and played very many short videos to the audience. 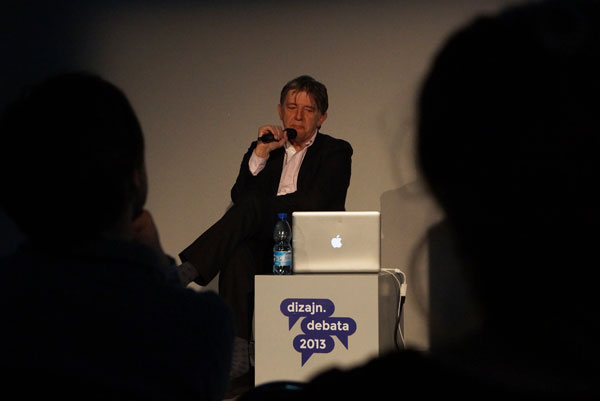 London’s Design Museum director Dejan Sudic revealed that the most successful show at the museum was the Christian Louboutin exhibition from 2012. Museums must have Blockbuster, not just Arthouse, right? 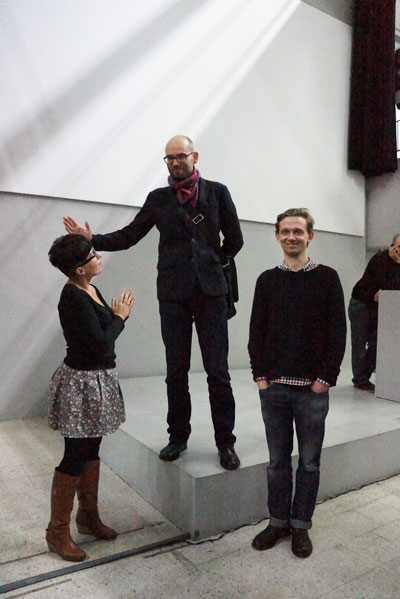 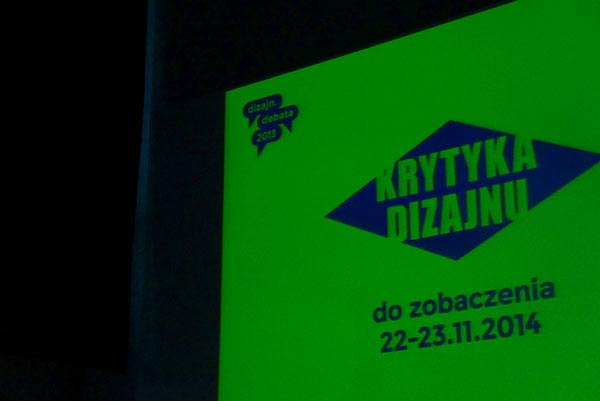 The next edition will be in November 2014! 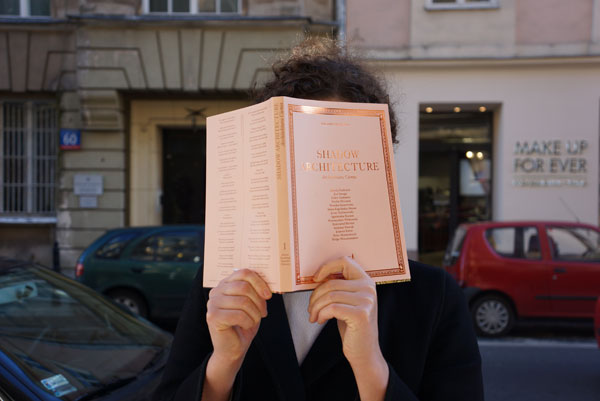 During our tour through the city we met Aleksandra Wasilowska, architect and editor of the book Shadow Architecture 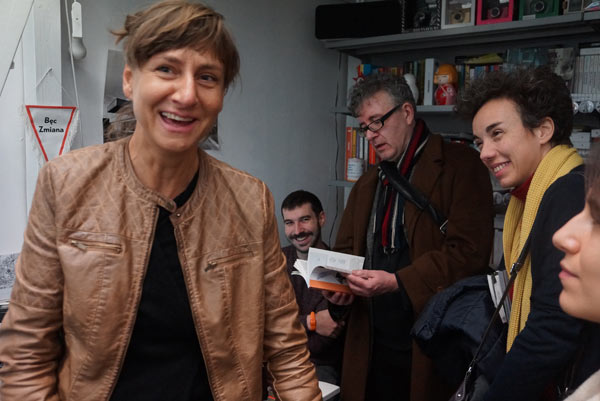 A cozy gathering at the bookstore and headquarter of Bec Zmiana , a foundation of Polish Design, Art and culture at Mokotowska Street. 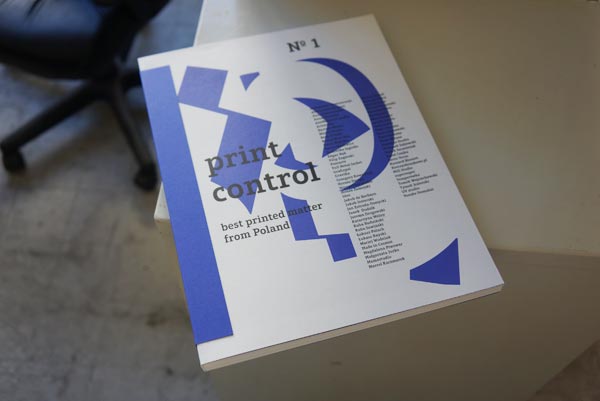 We visited Print Control. Their publication is already in its 2nd edition. But generally they function as platform that promotes polish print design. 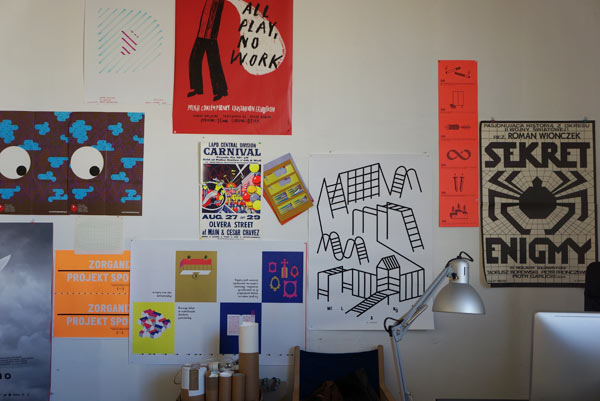 Male Studio, a former print shop that now serves as studio for various designers. They got a slogan that says: ‘Little studio – big ideas’! 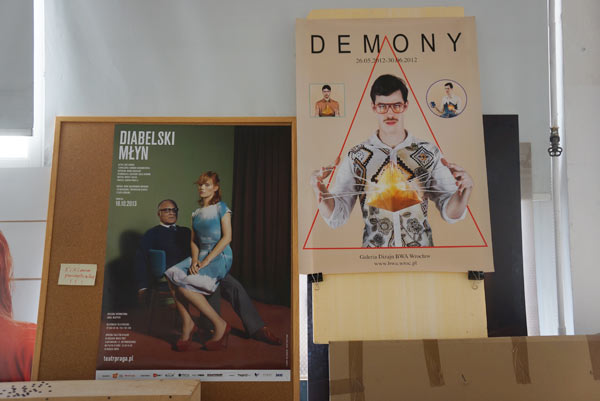 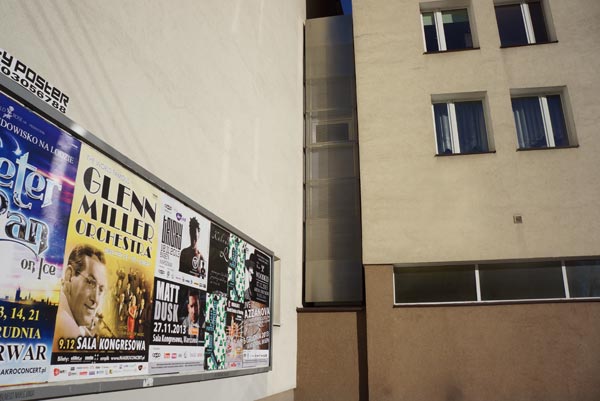 If you have claustrophobia this is not for you. This is Dom Kreta. A 92 cm wide building. 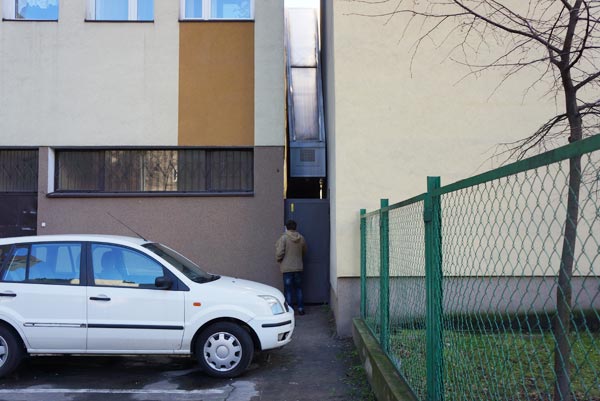 Rene and the entry of Keret House. 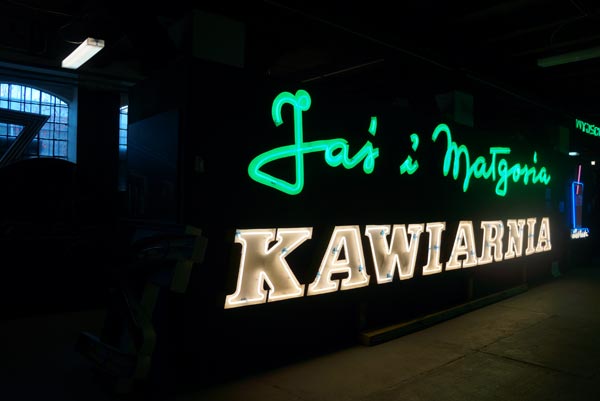 One of the nicest, original neons from a coffee place called ‘Hansel and Gretel’ at the Neon Muzeum 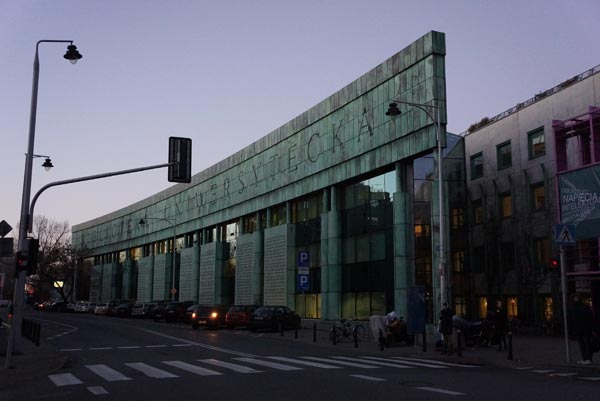 The library of the university before sundown 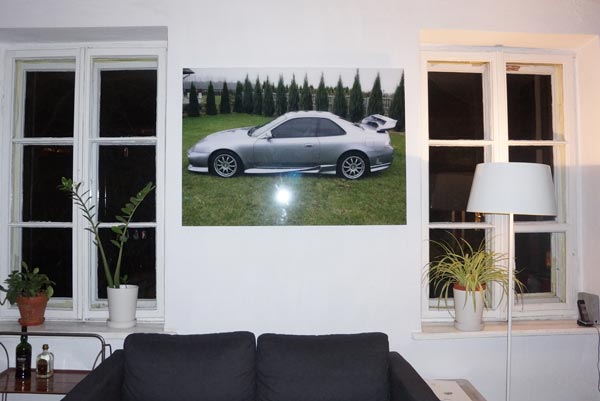 A picture by Mikolaj Dlugosz at Mamastudio 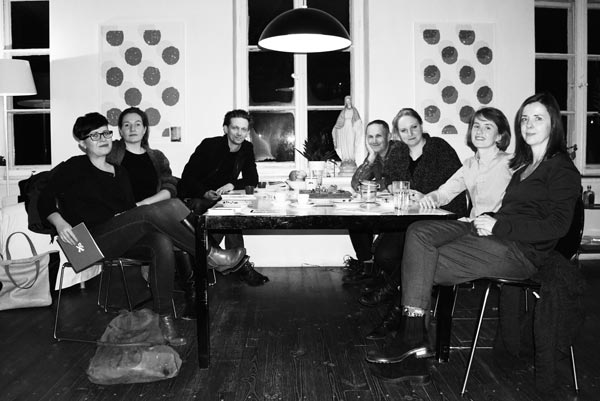