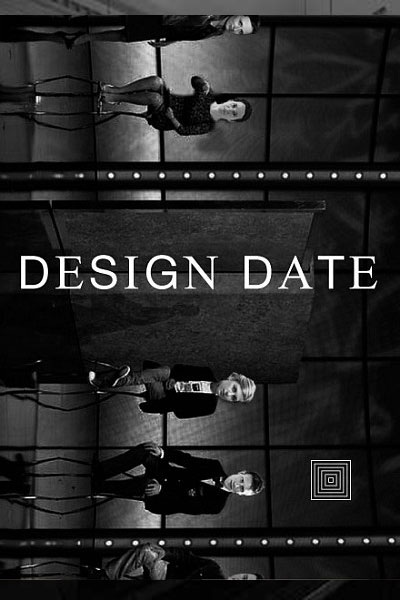 â€œWhat is the urge to initiate this format?â€

That is what Barbara Visser asked me when I was telling her about a format I am working on. With Depot Basel we wanted to do an emulated version of the popular dating show â€œBlind Dateâ€, to be conducted at Victoria & Albert Museum during London Design Festival.
Good question, Barbara.

A couple years ago Rebekka Kiesewetter, our latest addition to Depot Basel, suggested an interesting feature about cultural networks and their mechanism to the Swiss magazine Hochparterre. They found the idea interesting, but didnâ€™t see a possibility that such a comprehensive article would find itself in a print magazine. Yet, since then, the team at Depot Basel talks about networks and how intriguing it would be to unveil the system behind them: to make diagrams that show how directors, producers, curators, he or she, make choices when working with people; To make sweetheart deals visible; and to underline how making an effort can bring you where you want to be.

For Design Date we selected London-based participants. One of them was Marjan van Aubel, a Dutch born designer, who I got introduced to last year in Miami. In the process she turned out to be the matchmaker between Clea Irving, creative lead at West End concept space Sketch, and Reinier Bosch and Carolina Wilcke, who have recently started to work with each other. Marjan brought them together, what resulted in a show they did together in London. What happened here were similar dynamics to the work we do at Depot Basel, and what I do every day. People get in touch because they are looking for recommendations and every now and then you call someone for exactly the same reason. We are matchmakers. We not only are in a constant search for our matches, but we always keep our eyes and ears open to bring others together. Itâ€™s simple chemistry. Itâ€™s takes just a few moments for our brain is able to tell us if it could work or not. Endorphins are kicking in and we feel content because there is someone we relate to, we are curious about or feel challenged by. Thatâ€™s not only the case in a romantic date, but also in a professional encounter. We thrive on collaborations.

During the most design intense week in September, Design Date seemed an obvious choice. Why not show how charm can be a part of our work? And putting that in a game show seemed to be a good way to re-think the common talk format. Based on our knowledge and network we knew that bringing design adviser/producer Brent Dzekorious together with the designers Hilda HellstrÃ¶m, Silo Studio and Marjan van Aubel would be a good choice. Brent is interested in material; the three design studios work with it. Their fascination for material brings them all together naturally. Still, some of them havenâ€™t met before. V&A curator Jana Scholze was given the choice to meet with food designer Jacopo Sarzi, product designers Loris & Livia and design-duo Studio Swine. Sheâ€™s been looking for new encounters, as she told us before. Jana picked Azusa from Studio Swine and Brent selected Silo Studio. The decisions were partly made based on the content of the answers, and partly on how entertaining and charming they were. 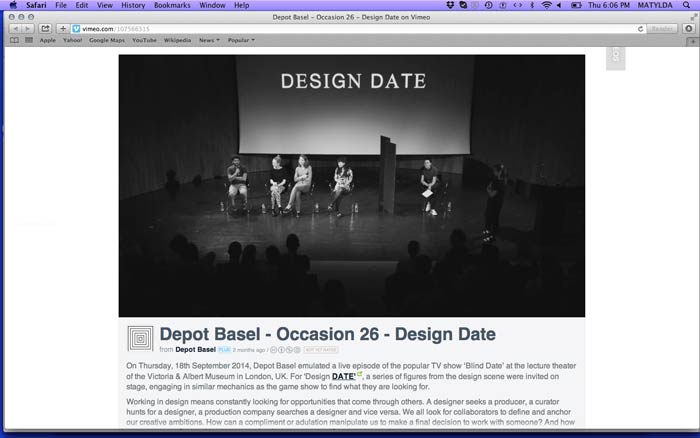 Jana Scholze:
How do you see design (in the broadest sense of the word) negotiated and communicated in the future?
Jacopo Sarzi:
Ideally design will be assimilated through culture and education, everyone will be a â€˜designerâ€™ and will practice his skills while doing his real job such as backer, farmer, taylor, shop assistant. I see the role of the full time designer that we know nowadays, a bit alike Mary Poppins. It comes when is really needed, just for the time needed.

Brent Dzekorious:
How do materials inform your design practice?
Silo Studio:
We try to inform the material that we are the designers and dictate what it should do, but as we start to work with it we find that it is more stuborn than us and it dictates of how it wants to work, then we just have to go with it what happens, so the material tells us what to do, the material informs us.

Jana Scholze:
What role does the museum in the future play – in particular in relation to your work?
Loris & Livia:
In the future the museum will bring the 4th dimension. It will become an open field where visitors learn or experience something new, because they feel they are not only spectators but also actors. The museum’s rules will be broken; the visitors are taken into a new interactive venture. What is exhibited is not simply labeled and categorised.

We listened, we watched and we were entertained. Sometimes Robert Andriessen, who was responsible for all video production, hit the automated â€˜laughterâ€™ button and it made us laugh. We were all nervous, because nothing was rehearsed. At the end footwear designer Tom Astrella recapped all answers made by the designers, like Graham would do in the original show. â€œIs it no 2, Silo Studio, the tactile Span-glish duo who mess about all day with materials, but come as two-for-the-price-of-one and who does things you wouldnâ€™t expectâ€ or Is it â€œAzusa from the spacious Studio Swine, who, when not in meetings or participating in fake 90â€™s TV shows, is out saving the Worldâ€™s Oceans, chair by chair.â€ Thatâ€™s how two matches for a business lunch at each designerâ€™s studio were made. A trip to Fernando was simply not in the budget.

Depot Basel presented what the invited figures from the design scene are looking for on stage. A couple of days after Design Date Jana Scholze wrote us: â€œI find Design Date brilliant, not just as an event but in the context of the discussions before and after. That has made it even more relevant. [â€¦] congratulations for the courage. I hope that format will continue.â€ Brentâ€™s response was similar â€œI had a fantastic time learning more about Attua and Oscar as people and what leads them in their design practice. We shared a number of ideas about how we might be able to collaborate in the future and I am certain we will at one point realise something together. â€œNo question, positive response is nice. But the best reward was what happened with everyone during the whole day: we became a team, a group of temporary collaborators through conversations, exchange and a joint experience outside of the working mode. 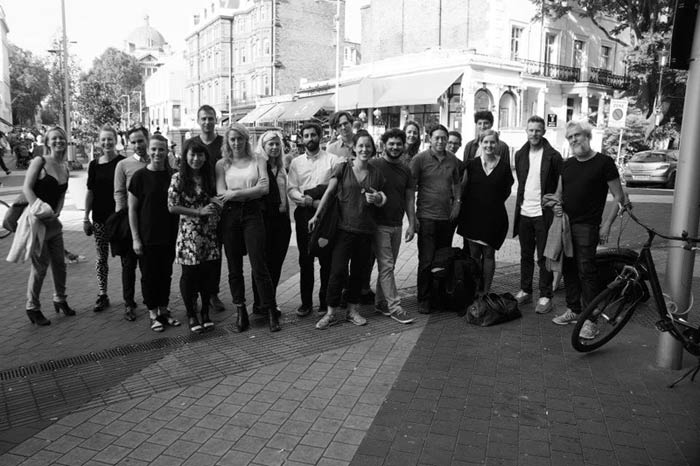 Thatâ€™s what Depot Basel wants to be. We want to altercate contemporary issues while speaking to our audience and protagonists on eye level, inviting them to make a stand. It is through experimentation, whether in format or content, that we try to make design accessible and negotiable. Blind date is effective – it gets people together, makes things specific, and gets the message across in entertaining 60 minutes. What happens later, is up to the “couples”: some get married, some never meet again. But everybody gains an opportunity. So is Design Date.

Barbara, the urge is just there. It must be obvious now. 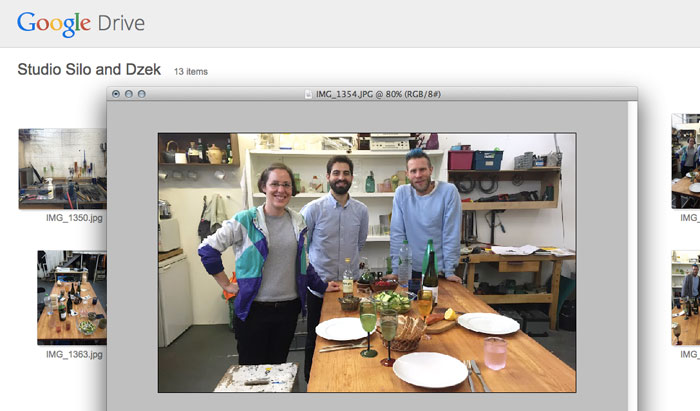 TA: Ladies and Gentleman welcome to Design Date. And here is your host Matylda Chi-cough-ski
CLAPPING
MK: Hello everyone to an episode of Design Date, â€¦.Letâ€™s meet the first three contestants.
CLAPPING
All designers from 1 walk in and sit down. They introduce themselves, casual talk.
MK: Now that weâ€™ve met the designers lets say hello to the curator whoâ€™s looking for a designer to work with in the future.
CLAPPING
Jana comes in. Hello Jana. You look great today. Tell us something about what do you look for in a designer? â€¦. Jana asks all 3 questions, each designer answers accordingly.

TA: So Jana, do you want to go for number 1â€¦ Jac-o-po Sar-zi, the Italian food designer, who doesnâ€™t do things just because they are cool. Expect that is, when heâ€™s working with ice
LAUGHING
Or number 2â€¦ Azusa, the couple who when not participating in fake, 90â€™s TV shows are out, saving the planet, chair by chair.
LAUGHING
Or will it be number 3â€¦ LORIS&LIVIA, the Swiss pair who say they talk too much, have a hands on approach and loooove story telling.
LAUGHING
The decision, is yours.

MK: Now we are getting to the final part of Design Date, â€¦.Letâ€™s meet the last three contestants for today.
CLAPPING
All designers from 1 walk in and sit down. They introduce themselves, casual talk.
MK: Now that we met the designers lets say hello to the design advisor who looks for a designer to work in the future.
CLAPPING
Brent comes in. Hello Brent. You look great today. Tell us something about what do you look for in a designer? â€¦. Brent asks all 3 questions, each designer answers accordingly.

TA: So Brent, will you go for number 1â€¦ Hilda, the craft-oriented, RCA graduate who likes work where there is not an expected outcome
LAUGHING
Or number 2â€¦ Silo Studio, the duo who mess about with materials all day, but come as two for the price of one
LAUGHING
Or will it be number 3â€¦ Marjan Van Aubel, the Dutch Designer who say that she is not the best at giving shape to things, but works well with materials and microbiologists ?
LAUGHING
The decision, is yours.