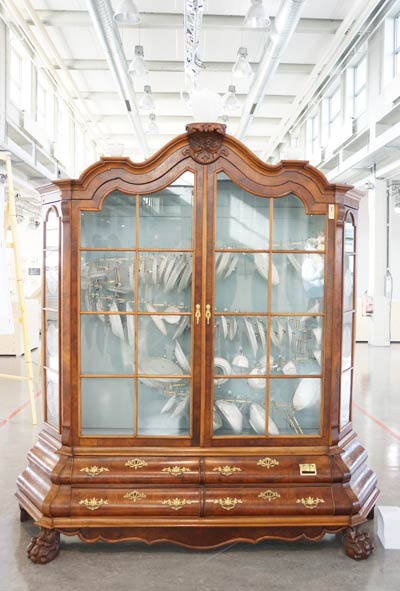 Last night in a bar in Whitechapel, London – it was busy and a Japanese friend of mine who lives in England since 15 years said “What a turn out”, an expression that defines that it is very busy because many people came. It made me think of the Dutch Design Week that ends today. I joined the press tour on the first Saturday last week. We started off at the Design Academy, visited the VanAbbemuseum, Designhuis, Kazerne – I shoot out to Sectie C in between and had dinner with the Dutch Invertuals. I take my judgment from what I saw that day and from what I have heard since than. It was the 12th edition of the design event in Eindhoven. They simply don’t give up on the dream of being THE design city. Today is the last day and this edition seem to be a presentation of everything design in all categories in your every day life for everyone: visually stunning, critical and social, for children and for grown-ups. Design is accessible in Eindhoven. It’s everyday and belongs to you and not just to a world of designers. The Volkskrant said yesterday ‘De crisis laat zich niet zien in de Dutch Design Week’. Where is this crisis everyone is talking about? Because it seems that everyone is interested in Design and everyone can afford it. Sometimes it’s the experience that counts. Buyers, gallery owners and the public were walking around, talking to the creators, buying directly. During a single day I witnessed that everyone is part of design.

Money Back Guarantee No.1 from Jelle Mastenbroek on Vimeo.

Does experience have to cost? Does a smile has a value? Jelle Mastenbroek provides experiences with duty free happiness, as he states on his website. The Moneyback Back and Spllendour Lender projects show that design can releases that smile in your face that doesn’t have cost you anything. In fact it simply costs you the effort of wanting an experiences that releases a positive feeling in you and a 1 Euro coin (I am sure other currencies are accepted) 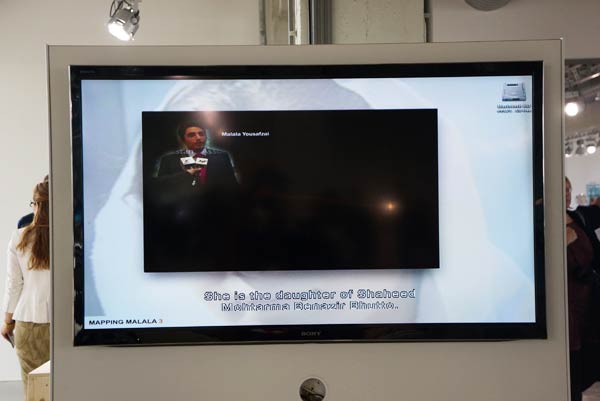 Designing the news by Monica Alisse . The American designer who graduated in the Masters program of Information Design at the Design Academy “how online publishing and a growing reader¹s participation influence our perception of news” on the example of the flow of publications that followed the attack on a young Pakistani girl, Malala Yousafzai, in October 2012. 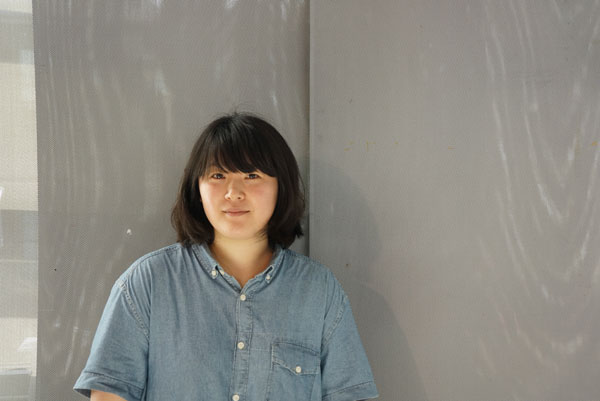 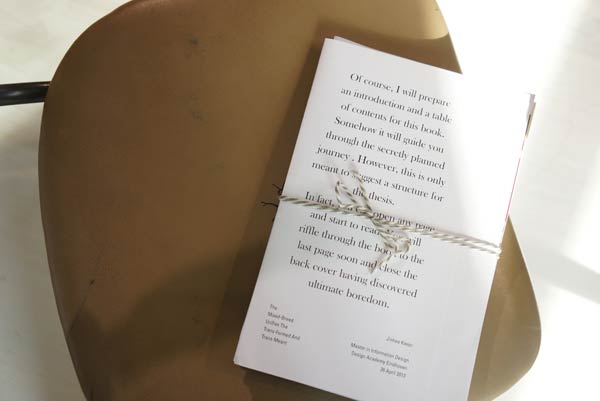 Jinhee Kwon‘s ‘The Mutt’ is a personal story. Korean Jinhee tells about her international culture of mixed identities, of a girl who got told to have a normal personality and not to stand out. She came to Holland and her expectations of coming a Western culture and working design in front of computer were wrong. She ended up making projects that are manually executed and realised that she is now there, to entertain us. 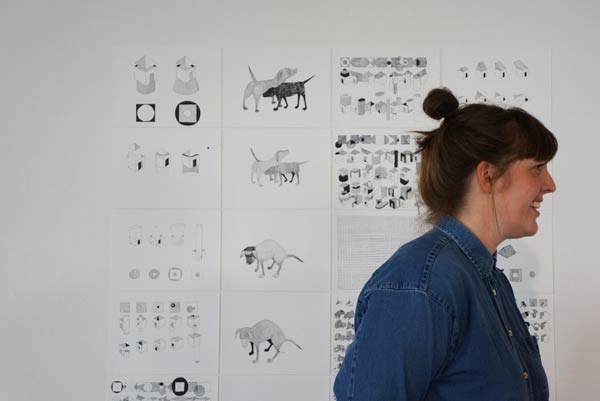 Physicalizing human relations and a horse by Danish by Ann Linn Palm Hansen . I haven’t seen the horse, but I am intruigued by her fine and simple black and white drawings. 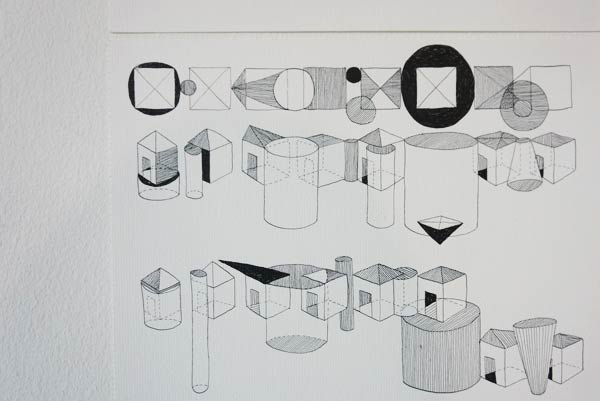 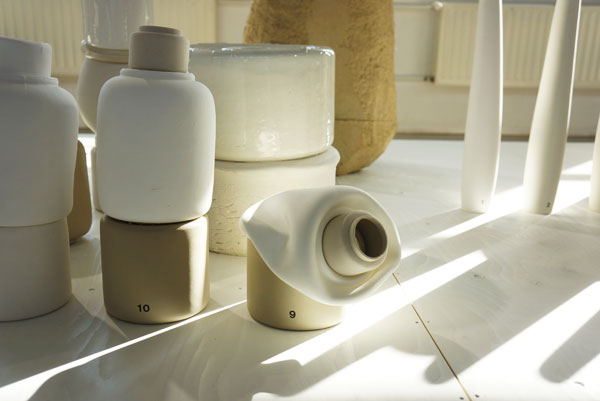 Symbiosis of stoneware by Dienke Dekker and Daniel Costa
A collaboration between the two graduates and between stoneware and porcelain, an experiment that defines the shape of the vessels while burned in the oven 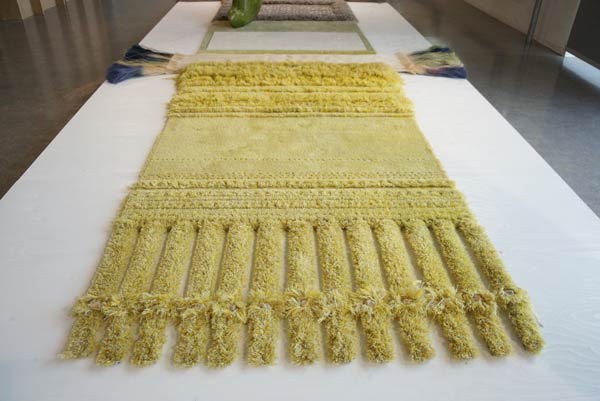 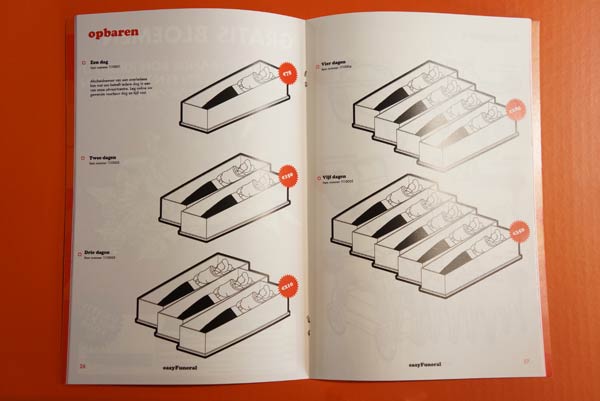 Mark Berkers experienced the loss of a close family member. His family’s vulnerable state made a mortician use their feelings which left the Berkers with a huge bill for the ceremony – a fortune for one of the few things in life that are certain. I wish Mark would not have made the decision to link his idea to Easyjet. I believe in his concept is strong, but makes the idea almost ironic. An own branding would have eventually real potential for the market. 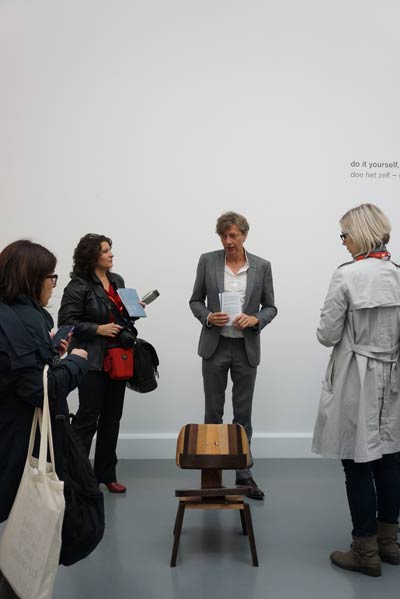 Current director of the Design Academy, Thomas Widdershoven, giving a tour through the ‘Self Unself’ exhibition at VanAbbemuseum, where the theme of the Design Academy continues. The selection of work of Alumnis is presented until end of November. I wonder for how long he will stay the director. 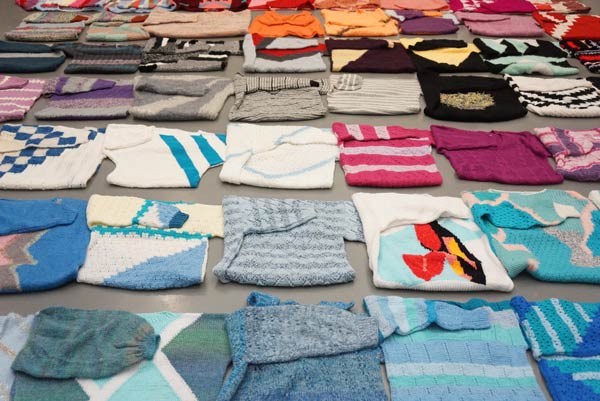 The Knitting Collection of Loes Veenstra by Christien Meindertsma. The sweaters have never been worn. On October 31st, ROOMSERVICE cafe and tearoom at Hôtel Droog will auction a number of unique sweaters over a dinner event. 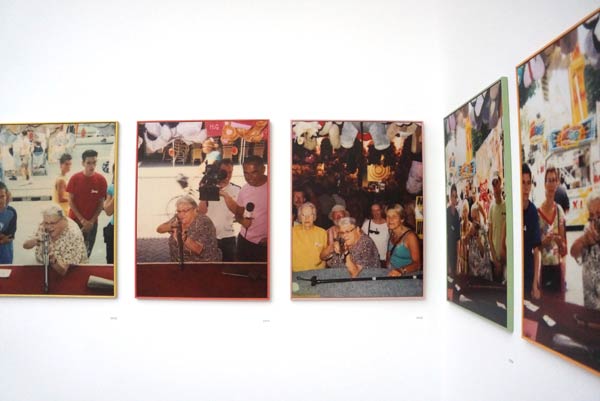 This is a highlight to me. Erik Kessel‘s selected and collected and brought this series if images into a book. Ria van Dijk has taken 1 picture of herself in a fairground shooting gallery since she is 16. Every time she hits the target, it triggers the shutter of a camera and a portrait of the girl in firing pose is taken. 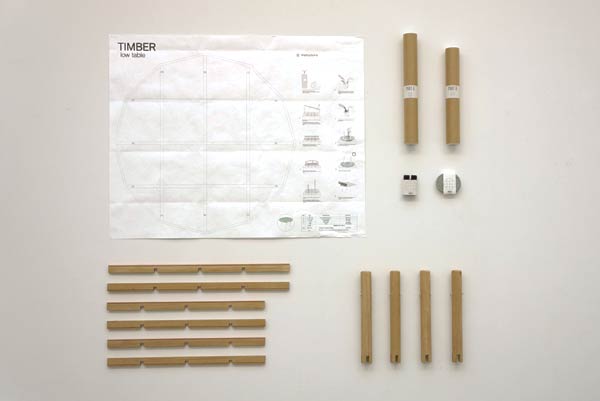 Timber by Vincent Tarisien is a DIY table range that comes in a cardboard tube.

Inside Out by Alicia Ongay Perez. The designer made a video where she demonstrates about a potential context for her work, definied by the people around her in London. She asked them to ‘read’ an porcelain object that she had designed. “Do you think it’s a good cup?”, Alicia asks. The answer she receives is:”It’s not the sort if thing I would like to drink of”.

Inside Out by Alicia Ongay Perez from Design Academy Eindhoven on Vimeo. 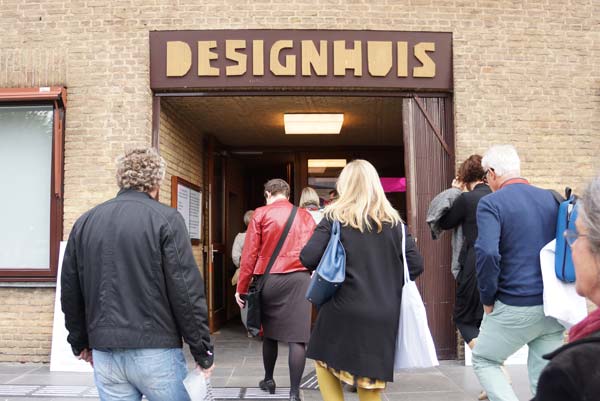 Next we went to Desinghuis for a tour around ‘De gezonde mens’, an exhibition presented in collaboration with The New Institute that shows how designers contribute to exploring health care possibilities. 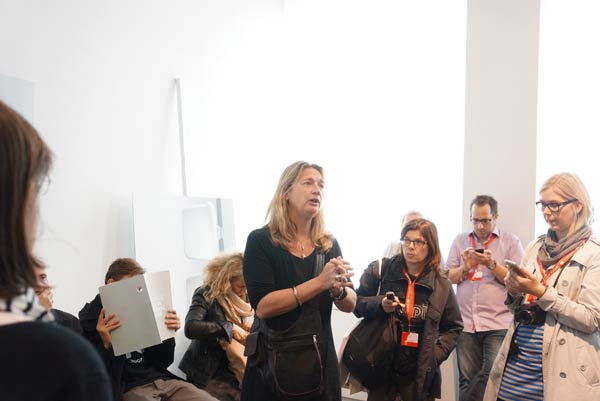 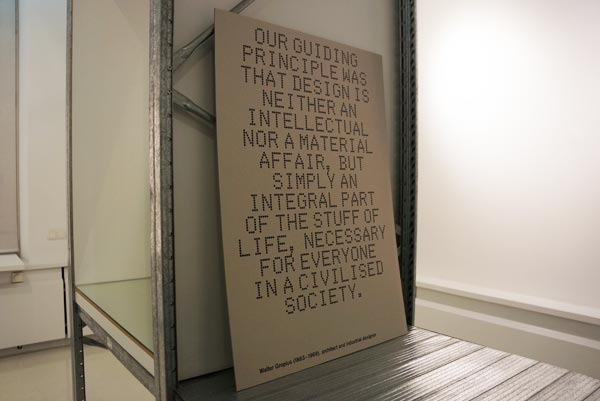 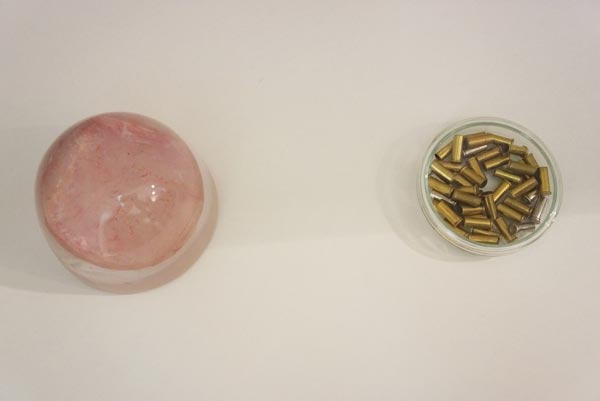 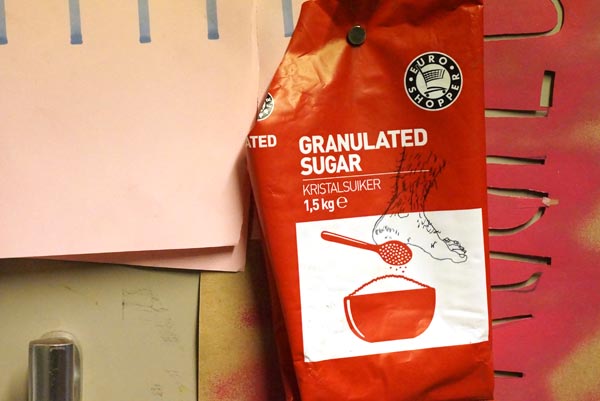 A good portion of humour makes your day, no? Unfortunately I don’t remember the designers name, so please if anyone knows it, let me know. I found it at Sectie C 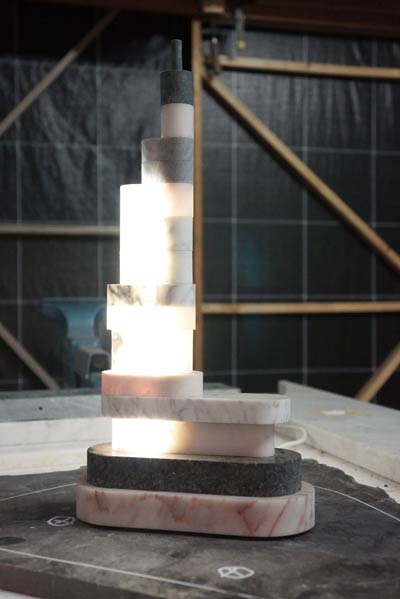 Sectie C is an old industrial area where designers from any kinds have their studios and work areas. Luuk van den Broek is one of the designers from Collaboration O. This is his ‘Stone composition’. 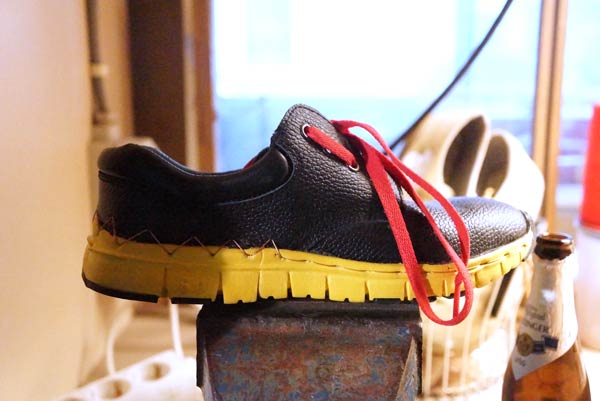 Dashilar Flagship store by Sander Wassink for Salon/ in Bejing. In his project he combines ols, unuseed shoes into new ones in order to create an local identity brand. 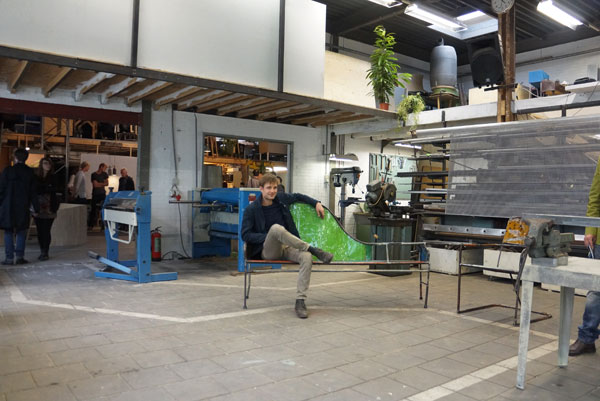 Designer Niek van der Heijden is one of the residence in the huge area. He moved there almost three years ago. 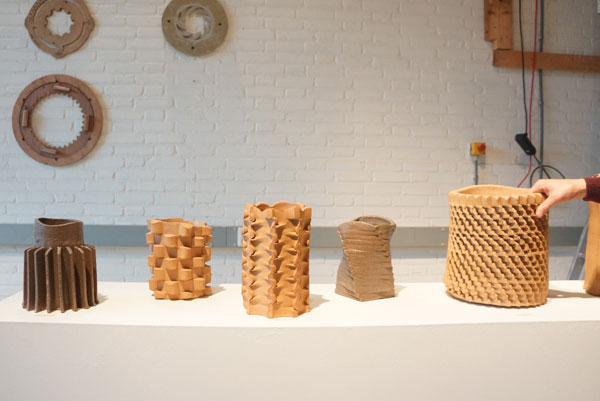 Pressed by Floris Wubben is a machine that presses epoxy clay into vessels. 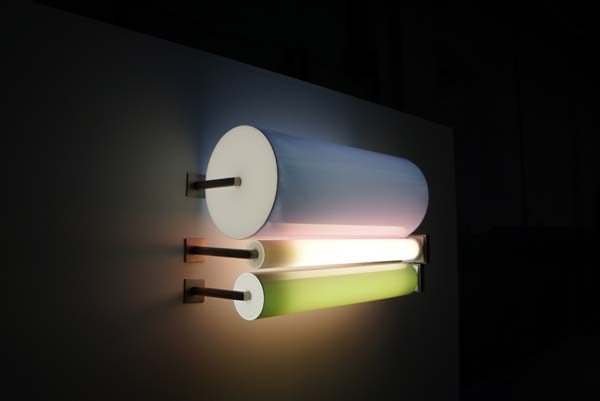 Leaving a very improvised Sectie C and arriving for dinner at Eat Drink Design, where the walls were painted black and the interior matched the concept is quite contrast. In between the aim for perfection was an exhibition of new projects by Dutch designers. This one is by Eva van der Moer 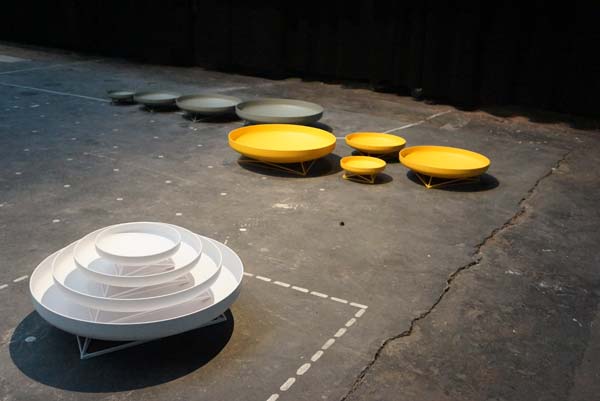 These Steel vessels are by Max Lipsey . 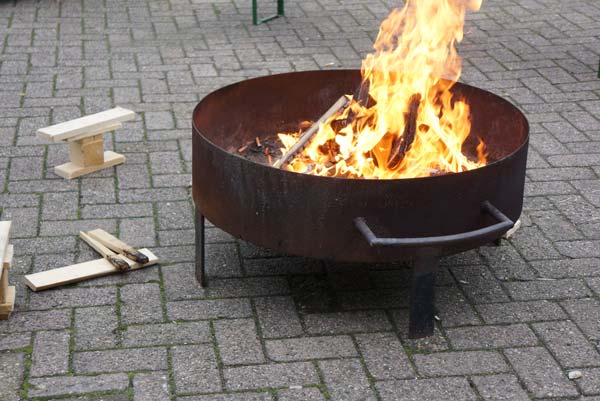 Food and a bonfire also always bring people together. I finished the day off with two dinners and plenty of visual sensations. I will post about the evening at Dutch Invertuals soon. Again, I wish to have more time next year.