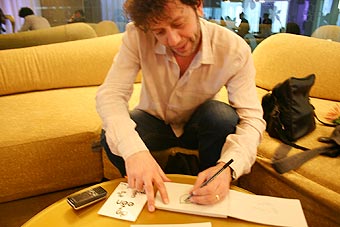 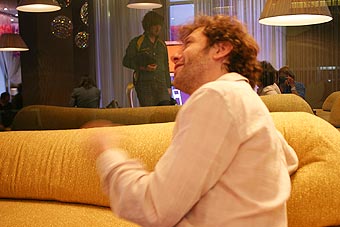 before I went to milan I was browsing through dezeen (online design magazine). I meant no harm by it, but I wrote marcus fairs an email and asked him for an interview in milan during the design week (I was sure that he should be there – he is one of the rainmakers of online design). he replied with the words: ‘I’m sure we can find time to meet up’ and our date was fixed. a few days later I found myself waiting in front of the nhow hotel. I had no clue how this marcus should look like. he was late so I decided to google him. when I went back to our meeting point I heard people talking about him. obviously there were more people waiting for mr. dezeen. after an hour he appeared and was standing in front of our troop. he looked at me and said: ‘you are the lalala girl’ and our interview started.

we sit down in the lobby of the nhow design hotel. marcus told me that he studied furniture design. he was in for his studies but he was always better in writing essays about design than in designing. he was also thinking about becoming an musician but that shouldn’t be either the right choice (another uncertainty of this skills, what makes him more likable). a passoinate writer should write and that’s what he tend to do. in 2003 marcus launched icon (the link belongs to the sister site to icon magazine), the international architecture and design magazine and edited the publication until the end of 2006 (they kicked him out). he was ready for a new ‘baby’. fascinated by internet (‘the new medium – accessible by everybody’), he established dezeen in the same month. he started without any expectations. now, in april 2008 (after 1,5 years) he can call his baby ‘world’s most influential and respected design journal’. congratulations to the man who thinks that a lemon is the multifaceted and most exciting object of the world! 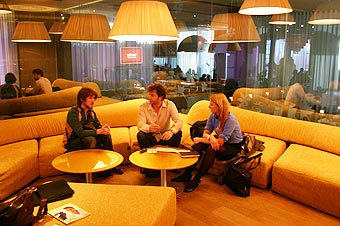 lounging and talking in the nhow hotel reception, alex (the dezeen camera boy), marcus and me 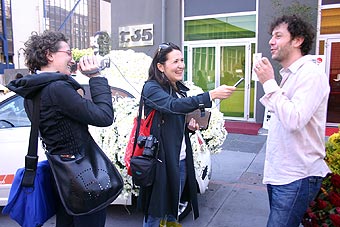 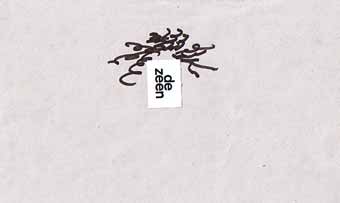 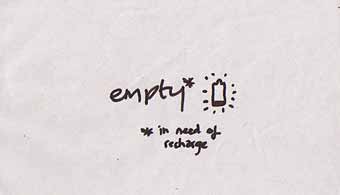 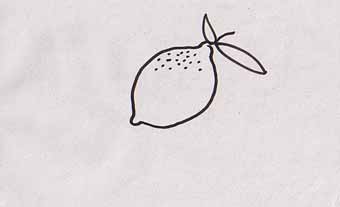