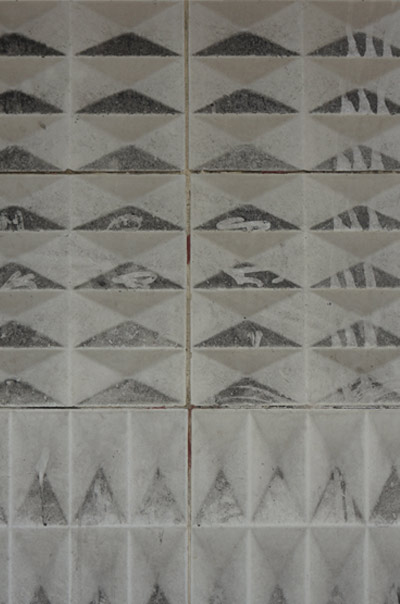 Monica and Jill from NY-based design & arts blog Sightunseen have asked me weeks ago if I want to report the happenings around London Design Festival. I knew, I will be coming, but I told them I will be there just for one day. However, I managed to see plenty of things even if I know that I still missed a lot. Here is a resumé of my Saturday marathon, where designer Josh Bitelli joined me on route. Here is the original post ‘What We Saw’ at London Design Festival 2013 for Sightunseen. 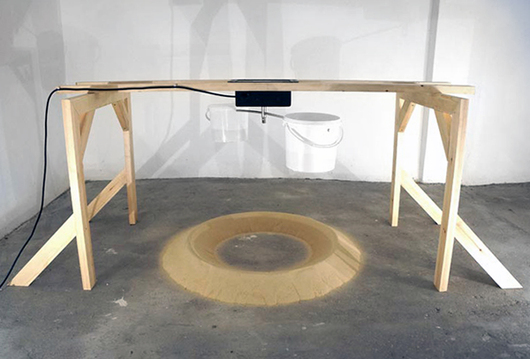 Philippe Malouin made an analogue 3-D printer to create molds from piles of sugar for his range of plates for Staffordshire ceramics company 1882 Ltd. This is an installation at Paper Tiger in at Brompton Design District, South London, that presents the process behind the plates and bowls. ‘Dunes’ underlines the production and not just the outcome. 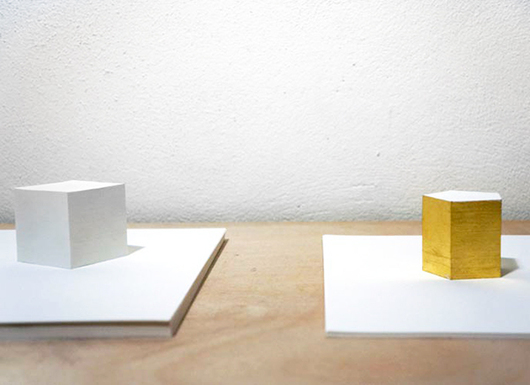 For the exhibition ‘Blanks in Between,’ initiated by the Workshop for Potential Design, Gemma Holt made Blanks of Blanks, papwerweights from paper that refer to the sheets in a book: usually white, sometimes painted gold. 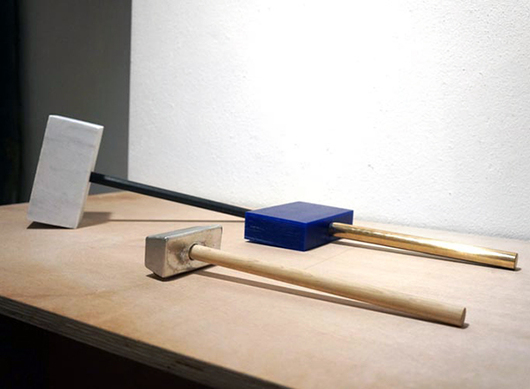 Study O Portable reflects on the earliest distinction between a rock and a hammer. They combined various materials into three new perceptions of hammers: white Carrara marble with a chiseled steel handle, type metal with a Maplewood handle, and blue casting wax with a cast-bronze handle. 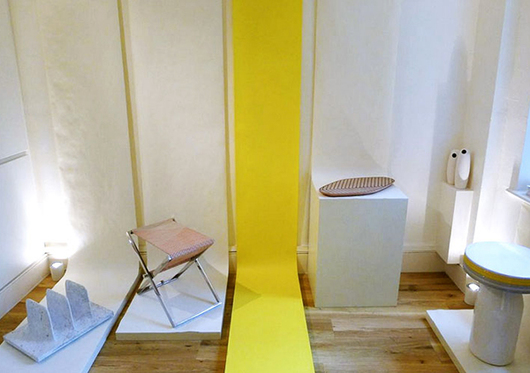 Eva Feldkamp and Laetitia Di Allegri recently started to collaborate. They met, they talked, and now they work together because they have a similar mindset. During LDF they presented ‘Issue no. 1,’ a selection of various projects from the past, like the porcelain Caraffe by Eva and the marble sculpture with an unexpected extra function by Laetitia that was made for Depot Basel’s ‘No Function No Sense’ exhibition in 2012. There were also three projects that are a result of their having joined forces: a folded stool, door handles, and a tray. 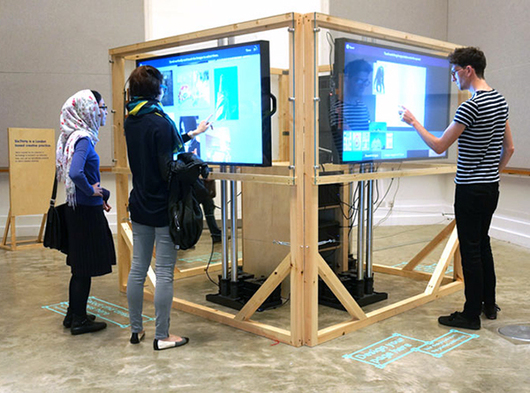 Collate by Sixthirty is a touchscreen installation at the V&A that invites visitors to participate in making a publication that’s being printed after LDF. An interactive opportunity to get a feeling for self-publishing: Who said print is dead?” 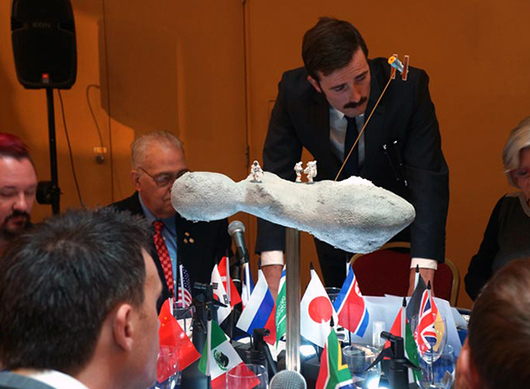 It felt like a film set when I bumped into the Disaster Playground by Nelly Ben Hayoun at the V&A, a live brainstorming session at a round table with world-leading scientists in the field of potentially hazardous Near-Earth Objects and disaster mitigation. Cameras all around, nine people at the table that could have been actors, and people gathering. All this in the section of August Rodin, if I’m not mistaken.

Irini Papadimitriou (left), the V&A curator responsible for of the Digital Design segment of LDF, together with the designer and inventor of the Disaster Playground, Nelly Ben Hayoun. Earlier this year at the Serptentine Gallery, Hans-Ulrich Obrist said to Nelly of her work, ‘This is most urgent’! 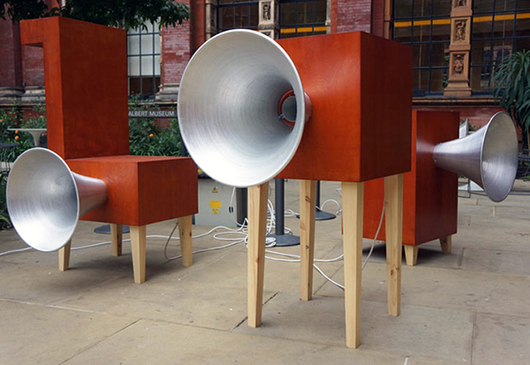 Music, sounds, and people — all three stand for Yuri Susuki’s work. The Tokyo-born artist regularly puts all three in relationship to eachother. Garden of Russolo is an installation at the John Madejski garden at the V&A that’s an homage to Futurist composer Luigi Russolo. Yuri created a signature amplifier with electronics embedded within to transform ambient sound and the human voice into white noise 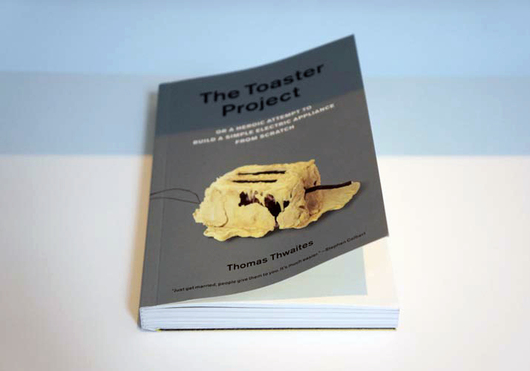 Thomas Thwaites’s 2009 Toaster Project was purchased by the Design Fund of the V&A! Thomas rebuilt a toaster from scratch during a 9-month period by extracting and processing the raw materials for the construction himself, only to find out that it would cost £1187.54 if sold. Mass-manufacturing beat him with a £3.49 version from Argos. Isn’t it absurd? 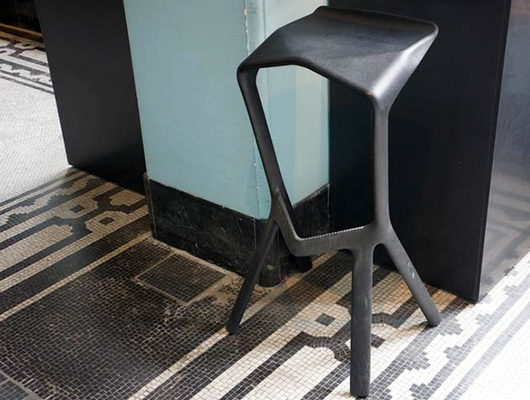 At the V&A, employees sit on Konstantin Gricic’s Miura barstool for Plank. Henry Cole, the V&A’s first director, declared that the Museum should be a ‘schoolroom for everyone’ — I wonder if he would expect everyone to sit on plastic chairs? 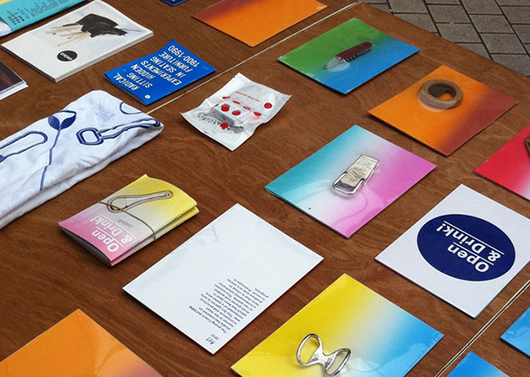 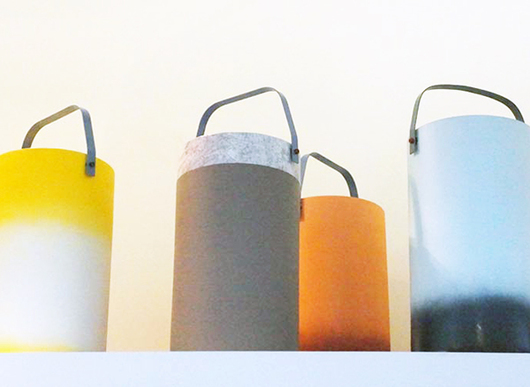 If I think of patterns and colors, I think of Lola Lely’s potluck stools that are made from solid wood. We had one on show, together with her lamps and candlestick holders, during Craft & Drawing at Depot Basel this year, and these four were standing at Mint Gallery during LDF. Lola says about the stools: ‘I want them all to be different. It’s a really simple shape in different colors and surface combinations. 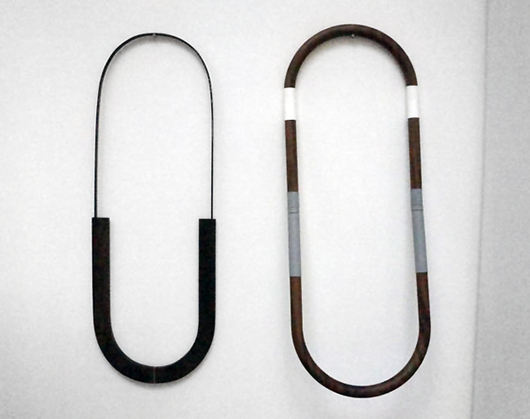 Marina Stanimirovic’s necklaces, also on view at Mint Gallery, caught my attention earlier this year, when Current Obsession magazine and I selected 10 jewelery designers for an editorial in their next issue. I’ll use a quote here that we will use also in the magazine: ‘Because even if you can’t wear it to go to work or go buy some food, the fact that it has been designed for the body makes the piece the most intimate sculpture or design object. 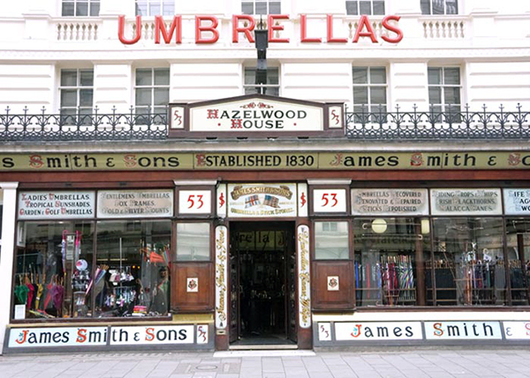 I think it’s a cliché that rains a lot in London. We had an incredible summer, and as I live life between Holland, England, and Switzerland, I had the feeling that Holland was the rainiest this year. However, London has this very unique umbrella store, right in the center of the city, called James Smith & Son, which exists since 1830. For those who don’t need an umbrella, it’s also the place to get a walking stick! 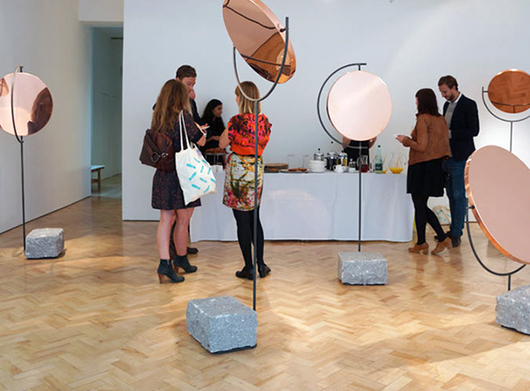 At Libby Sellers Gallery, I attended a Norwegian happening around food that was also a gathering of people who work with Libby. The central element was the newly launched Copper Mirror Series by Hunting & Narud, the first official product from a partnership between Oscar Narud and Amy Hunting. We’ve seen plenty of copper in the last seasons, but this brings it to another scale. 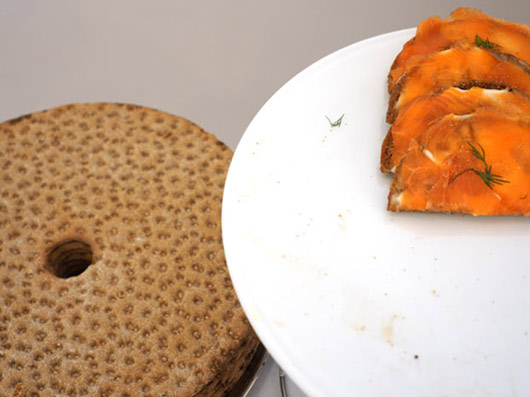 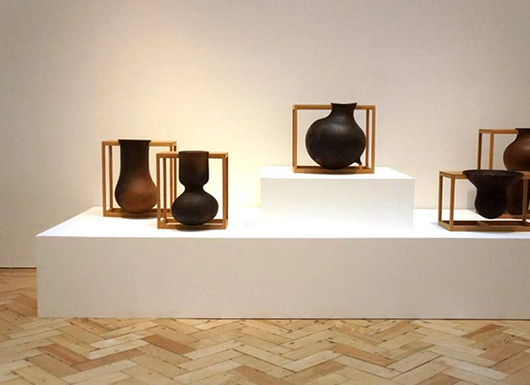 Liliana Ovalle’s Sinkhole vases were part of the ‘Grandmateria III’ show at Libby Sellers. The vessels are inspired by the geological phenomena of sinkholes. Earlier this year, Liliana showed me her sketchbooks, undecided on which of her ideas should became part of the Craft & Drawing show at Depot Basel. I thought the story of the voids that emerge abruptly from the ground and can swallow a truck from the street, or an entire house, was the most intriguing one — which Libby’s fine taste agreed with. 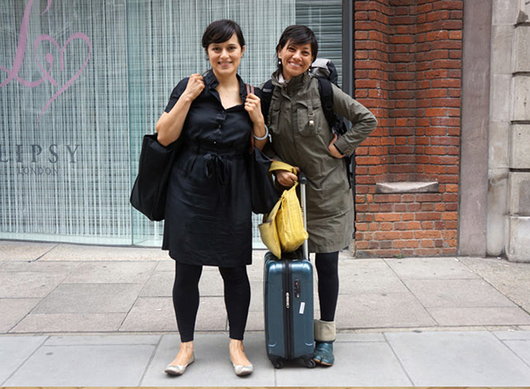 Liliana Ovalle with Kytzia Barrera from Colectivo 1050º — who helped her produce the clay pieces in Mexico — leaving Libby Sellers in Central London. Their next stop was the Apple store, and than Liliana went to Okay Studio’s ‘Loose Thread’ exhibition at Spitalfield Market. 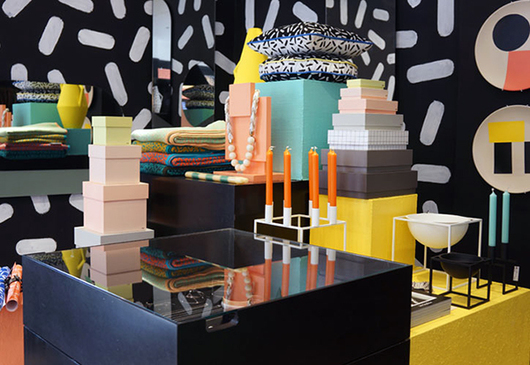 I’m always offended when they say that I play when I do Memphis work; actually I’m very serious, I’m never more serious than when I do Memphis work. It’s when I design machines for Olivetti that I play.’ —Ettore Sottsass. I think the concept store Darkroom wanted both this year, with their ‘So Sottsass’ exhibition —to play around and to do business. 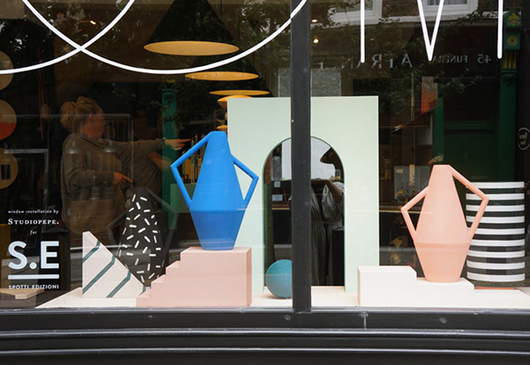 Darkroom invited Studiopepe to make their window display and commissioned new versions of their Kora vases for the store. The vase is a good reference to Memphis, but as it’s unglazed, it’s just an object, because you can’t actually pour water in it. 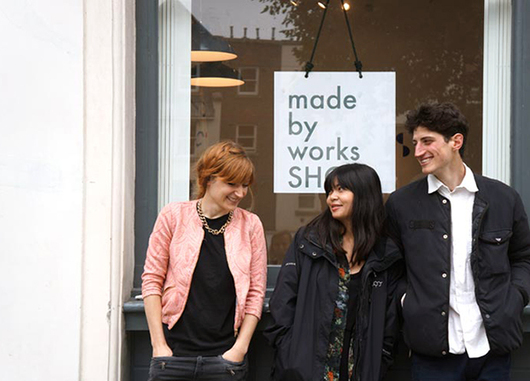 Meret Probst, Lola Lely, and Josh Bitelli, three of the participants of the new Works collective of RCA grads, who presented ‘Made by Works’ during LDF, a temporary shop and exhibition space. After their crowded show in Milan this year, they wanted to do a rather intimate presentation that they were able to control themselves 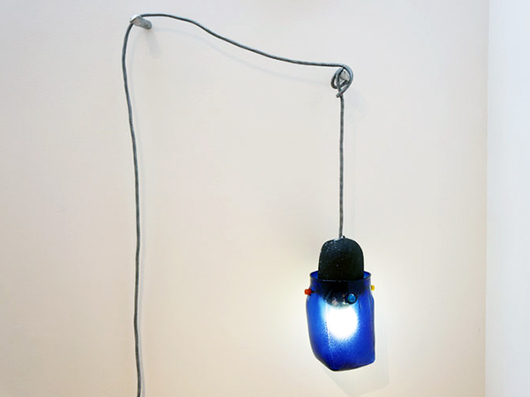 Textile-molded glass lamps by Silo Studio at Made by Works, another project that focuses on self-production. Later that day I bumped into one half of Silo Studio, Oscar Wanless, at Tent. He actually has blue hair right now. Last time there was some purple involved. You’ll see it for yourself later in this story. 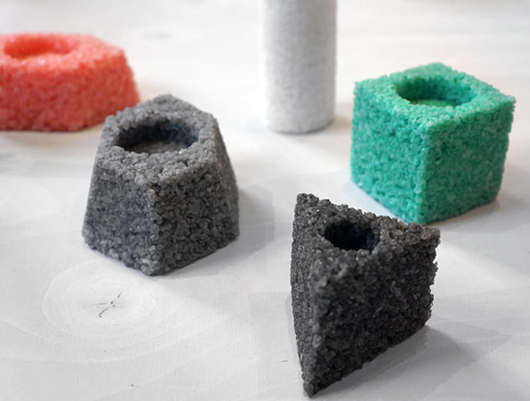 Meet the Flamingo Project: These simple-looking candleholders explore salt as a solid material for designing. Jungin Lee aims to apply it to furniture, pushing the potential of salt as a natural and abundant material found in our landscape, but I found the small experiments in this picture more convincing. Each piece can be dissolved in water at the end of its lifespan, bringing into debate the lifespan and landfill dilemmas of current product cycles. 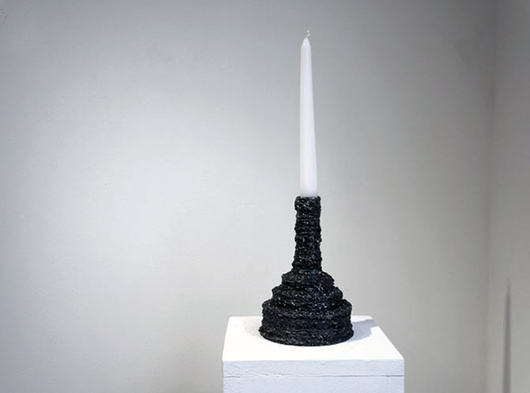 Josh Bitelli is an on-site researcher and experimental designer with the most amazing ability to put things in the most descriptive words (I guess that’s why he recently gave a talk at the 89plus panel with Simon Castets and Kevin McGarry). His project Welded Drawings includes this candelholder and many more, which were made for Craft & Drawing at Depot Basel. During LDF the project was part of Made by Works. 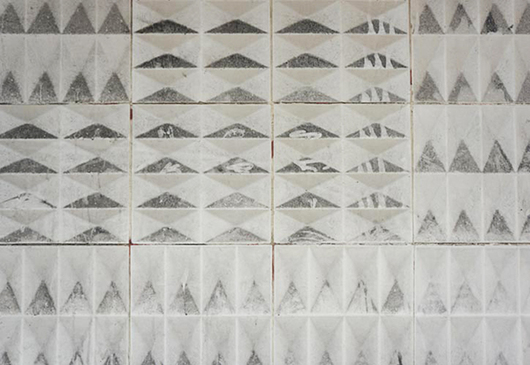 Josh Bitelli joined me on my walk from Clarkenwell to Shoreditch. On the way, we found this fantastic façade. ‘Time and diesel in a big city. It’s a gritty city,’ Josh said. We both enjoy the evolution of things. We are solely responsible. 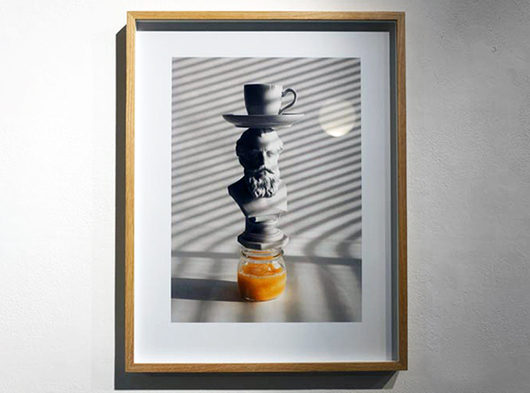 At KK Store on Hoxton Square, culture and food magazine The Gourmand invited photographers to take pictures of the views from kitchen windows. This one was taken by Gustav Almestal. The shadow of the blinds suggest that there’s a window. 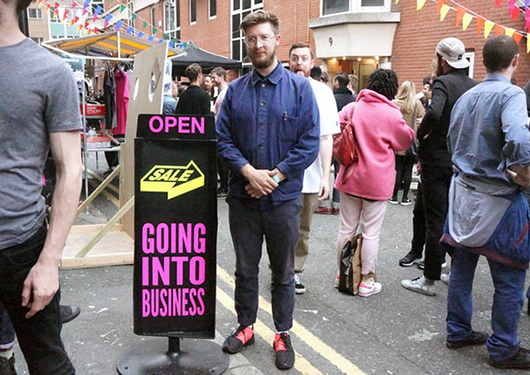 Recent RCA graduate Tom Gottelier put a show together with the title ‘Going into buisness,’ about self-prduction and entrepreneurial ambition. Check out the guy in the back who’s photobombing. And most importantly, check out Thomas’s website for the projects. 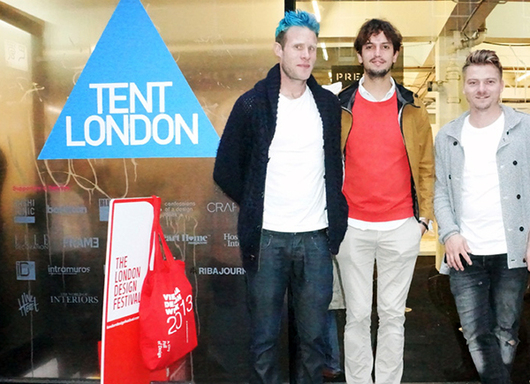 As I said before, Oscar Wanless of Silo Studio is all blue at the moment. I couldn’t resist photographing him together with Lex Pott and Rutger De Regt in front of the Tent entrance, color matching. 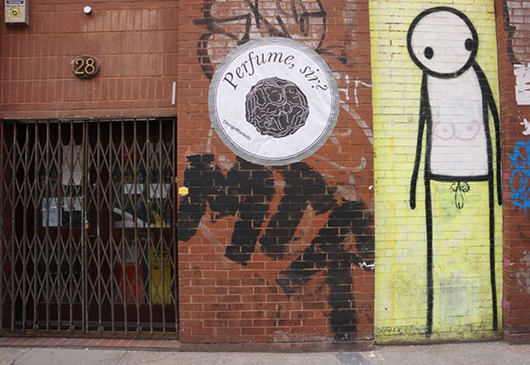 The front of Designmarketo’s ‘Perfume Sir’ show on Redchurch Street in East London. Over the course of LDF’s 10 days you were invited on a journey through the wonders of pepper, by way of commissioned objects, workshops, dinners, perfumes, and flavors. It featured works and workshops by food scientists Arabeschi Di Latte, oxidizing professional Lex Pott, Peter Marigold, and Odd Matter, among others. 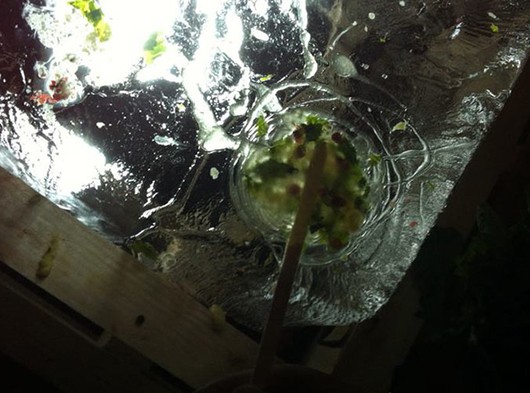 I concluded my marathon romp through LDF with fantastic Jacopo Sarzi’s ice-sculpting and cocktail-making workshop. One of the stands was reserved for lollipop making on an block of ice. Basil, peppermint, and ginger went into a little dent, a wooden stick got poked into it, and Jacopo’s assistant poured a melted sugar paste on top. After a while it all stuck together and you were ready to lick it and to stir it in your drink. I was eating lollipops all evening because alcohol would have made me too tired with my jetlag.